Monday night’s loss to the Dexter Dazzlers was a hard lesson learned for the Sluggers but I could tell right away Tuesday night’s double header was going to be different.  There was just something about that look in those Slugger eyes.

Something kind of spooky.

As home team the Sluggers took the field first and started out strong with Janessa in the circle and an army of green behind her. 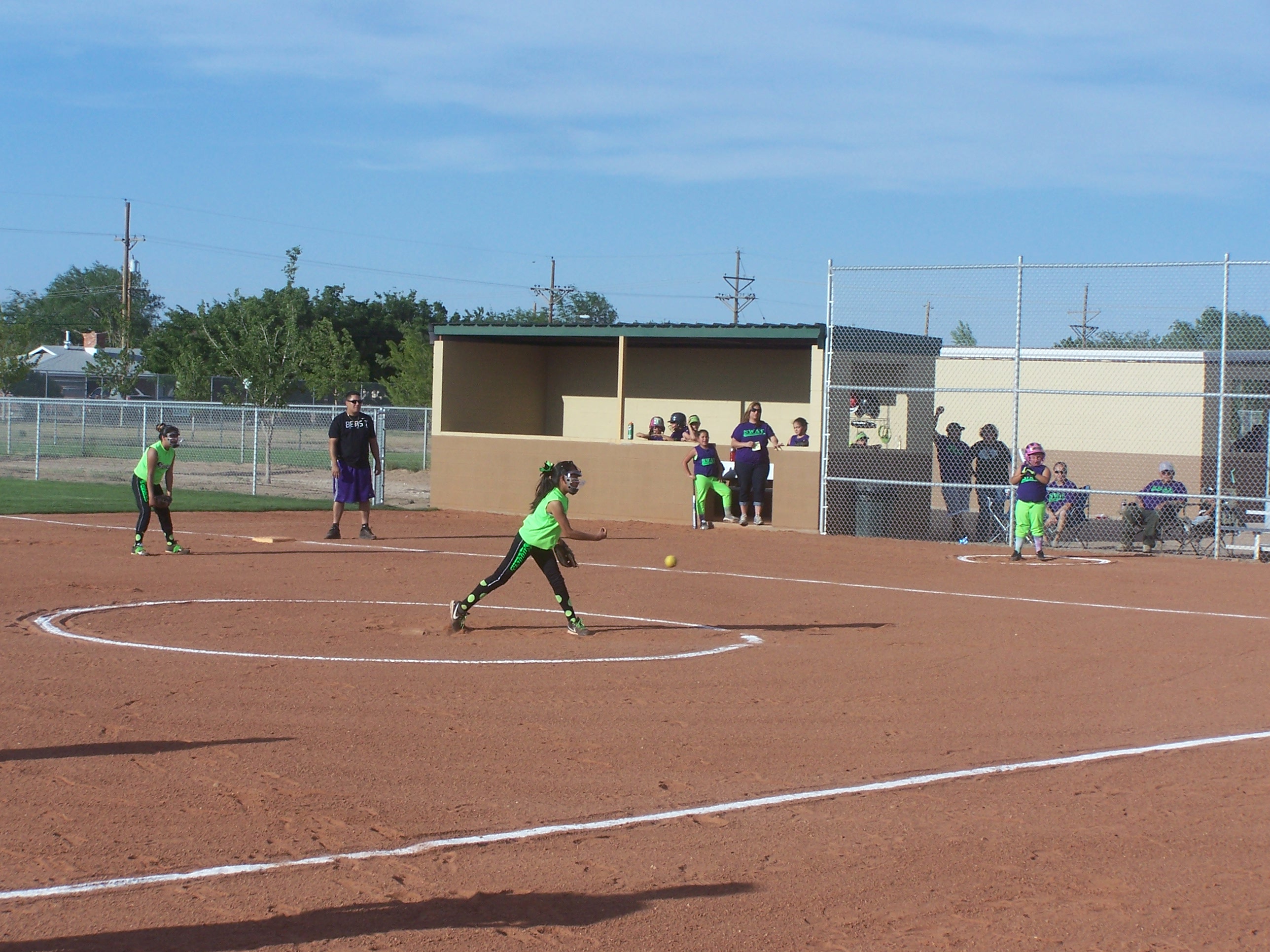 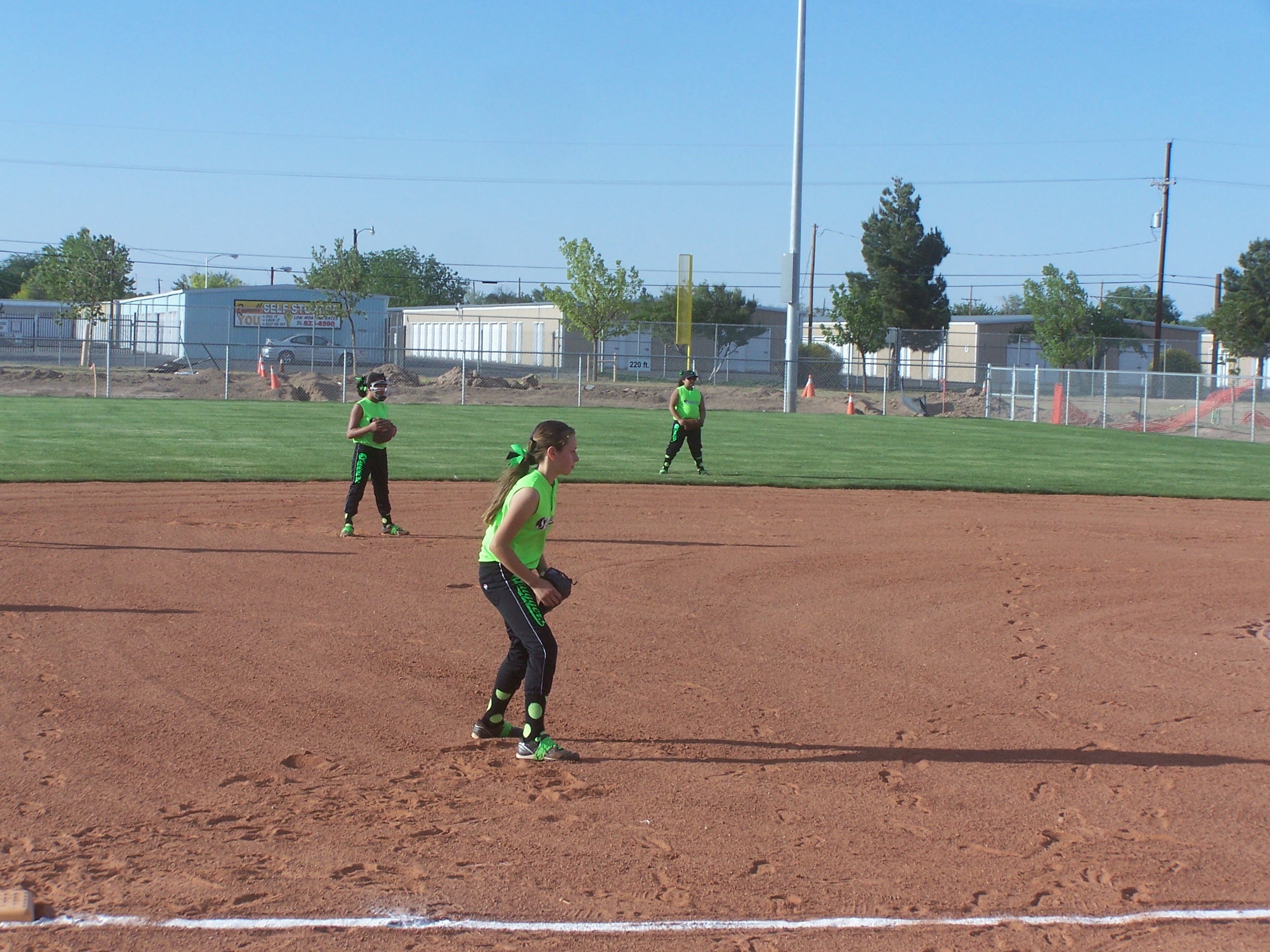 With that kind of backup Jello was able to turn the inning around quickly and the Sluggers went up to bat.  The bad news is that in the transition from field to dugout our Jazz must have hit a soft spot on the infield and twisted her knee pretty badly.  Jazz had to be carried off the field and wasn’t able to play the rest of the knight.

Once at bat the Sluggers again morphed from a ten year old girls softball team into a hardened organized crime syndicate. 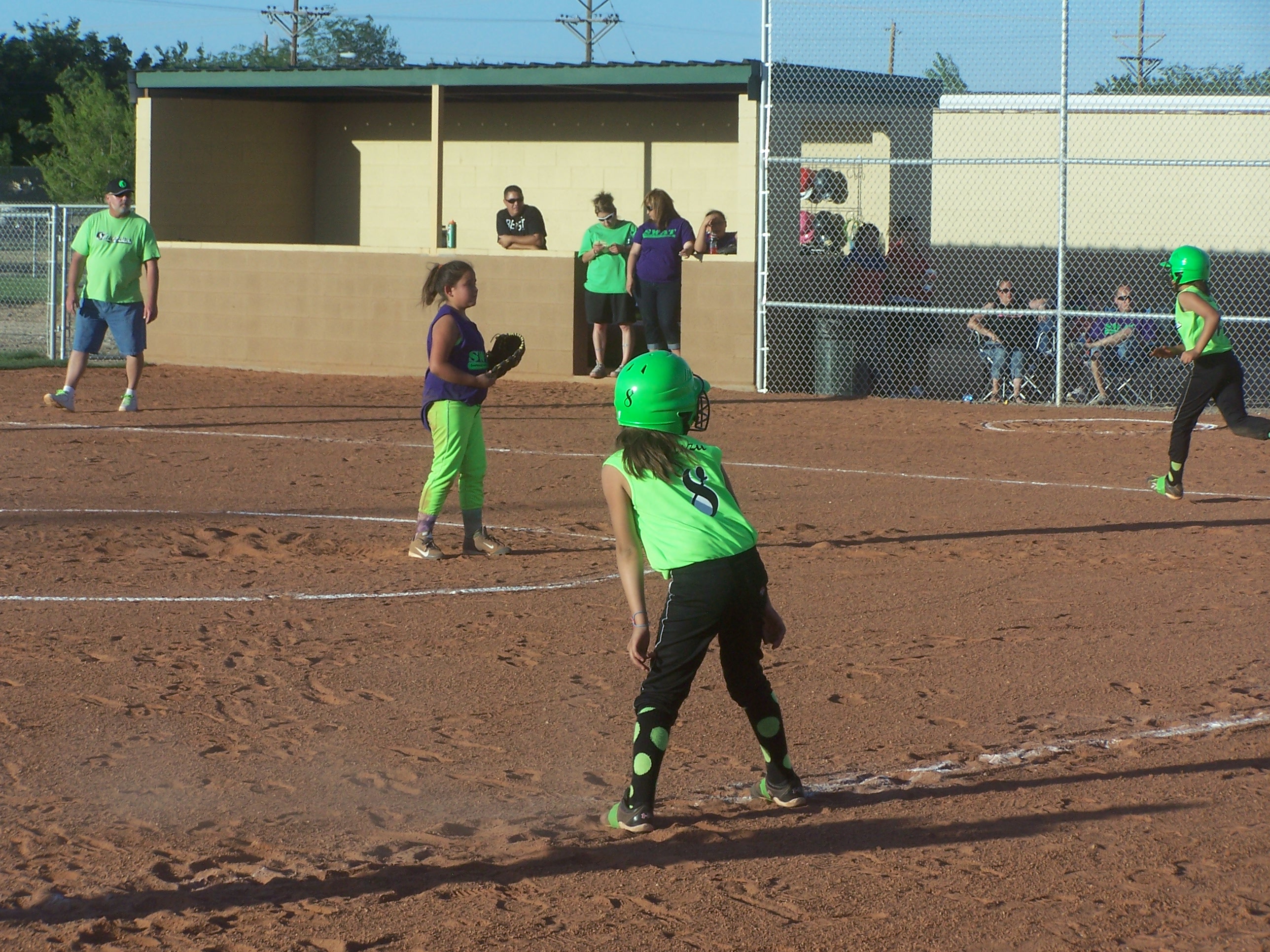 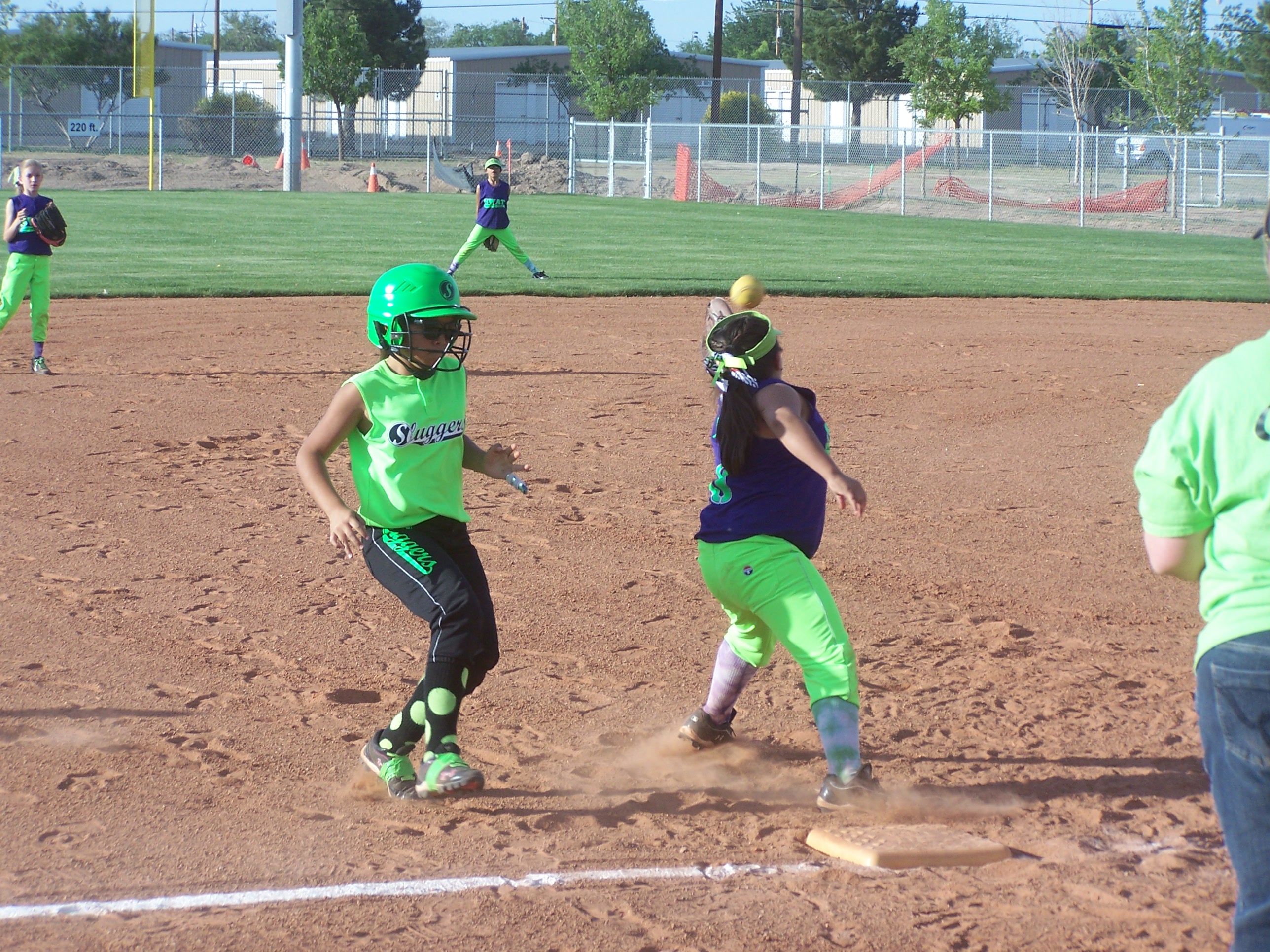 There was so much theft in the field I had to check my wallet, but coach Candice offered to do it for me. 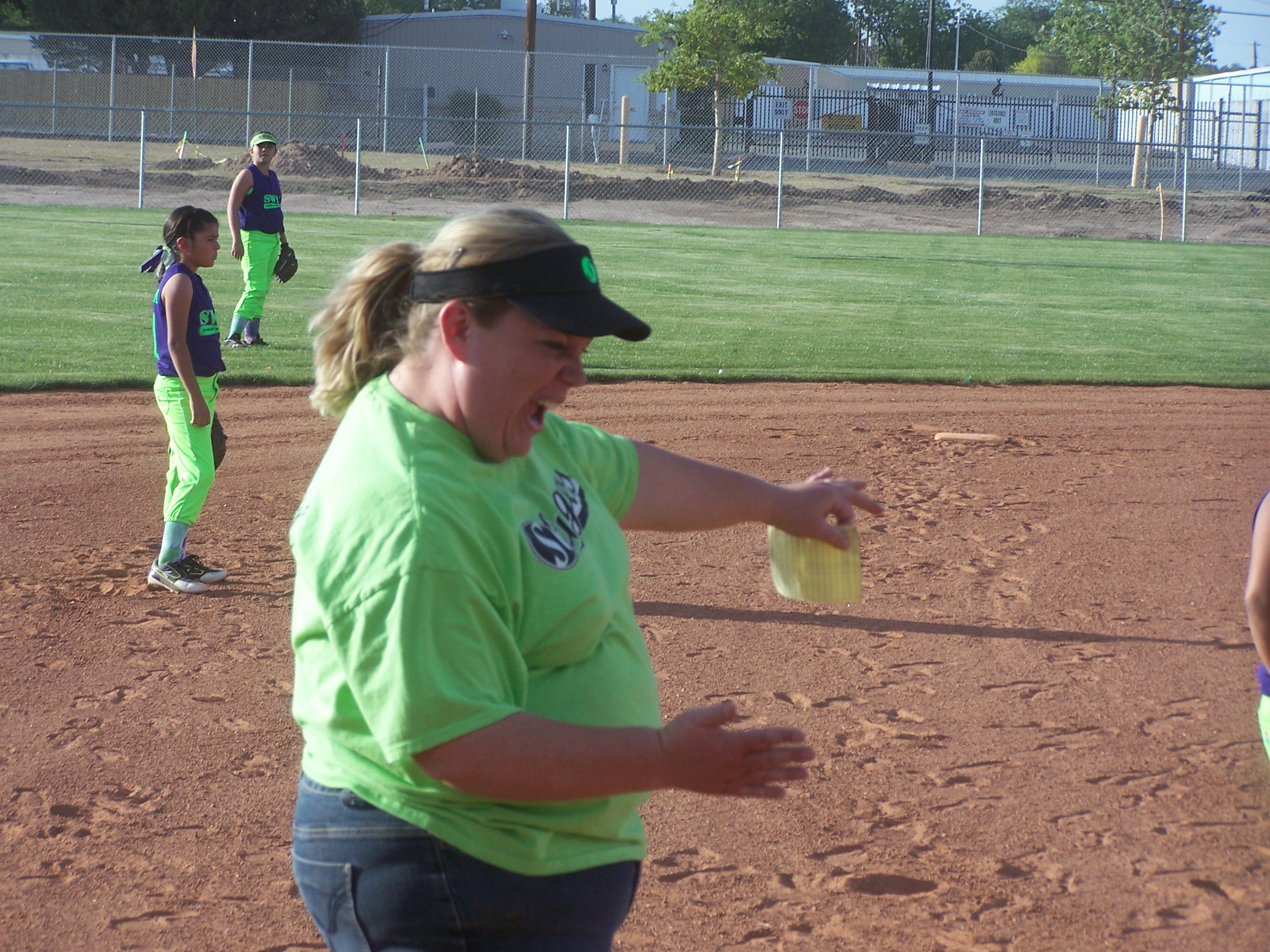 After coach Candice collected herself I noticed something.  Hits!  I noticed hits.  As the first game ended and the second started the Sluggers were well into a hitting spree. 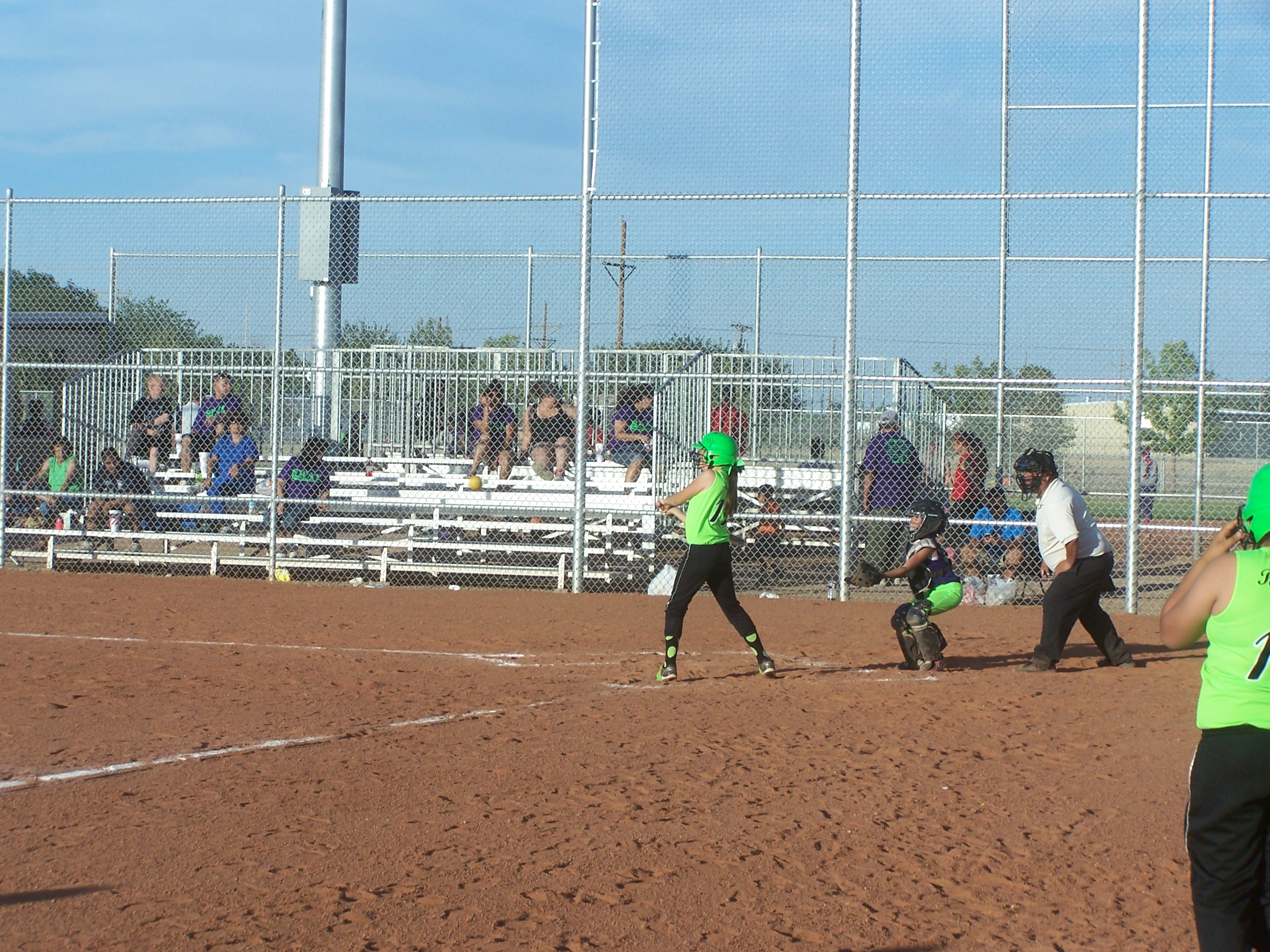 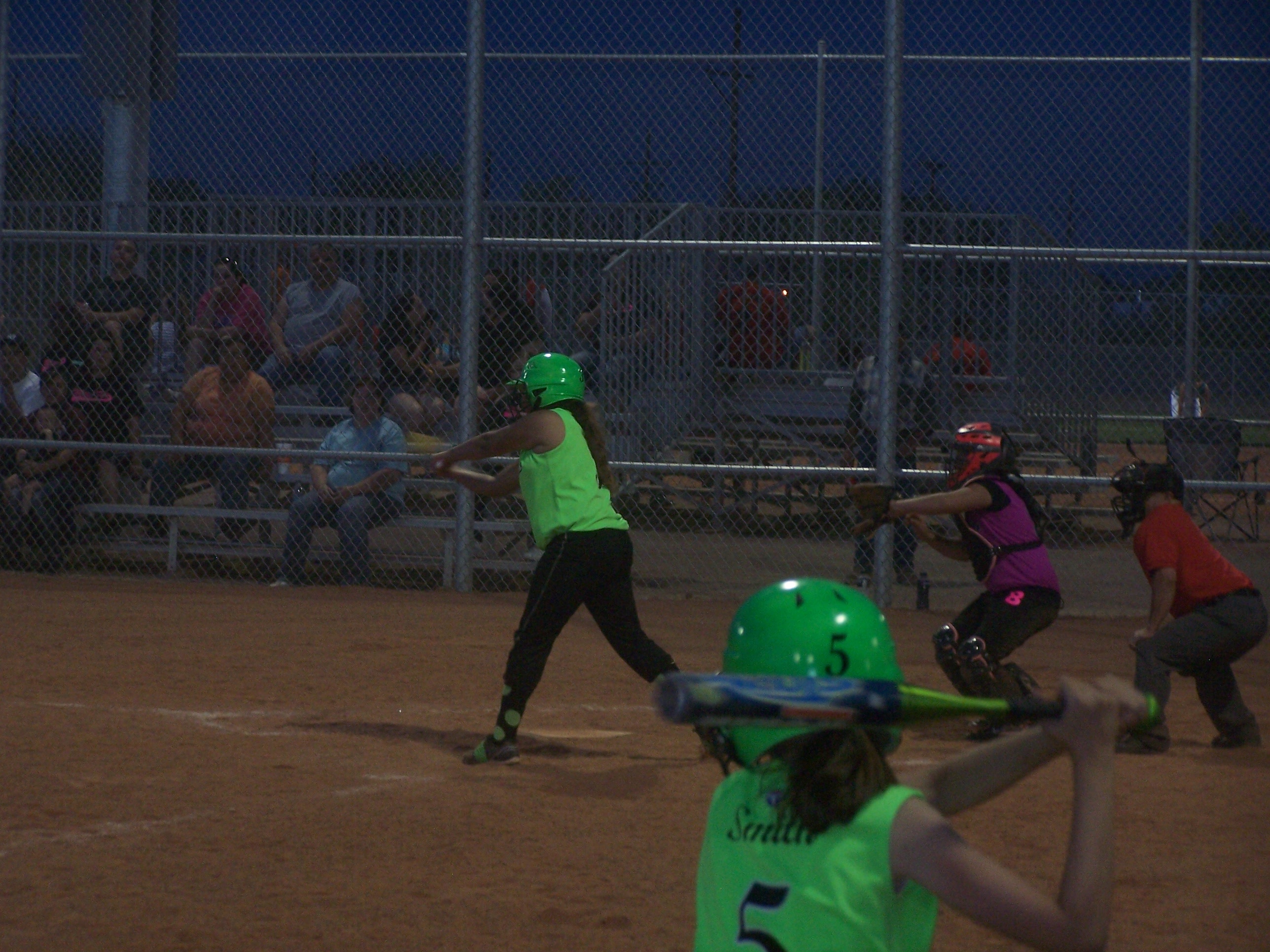 Tuesday nights double header against Swat and Mits Fits had to be one of the most productive events the Sluggers have had at the plate. 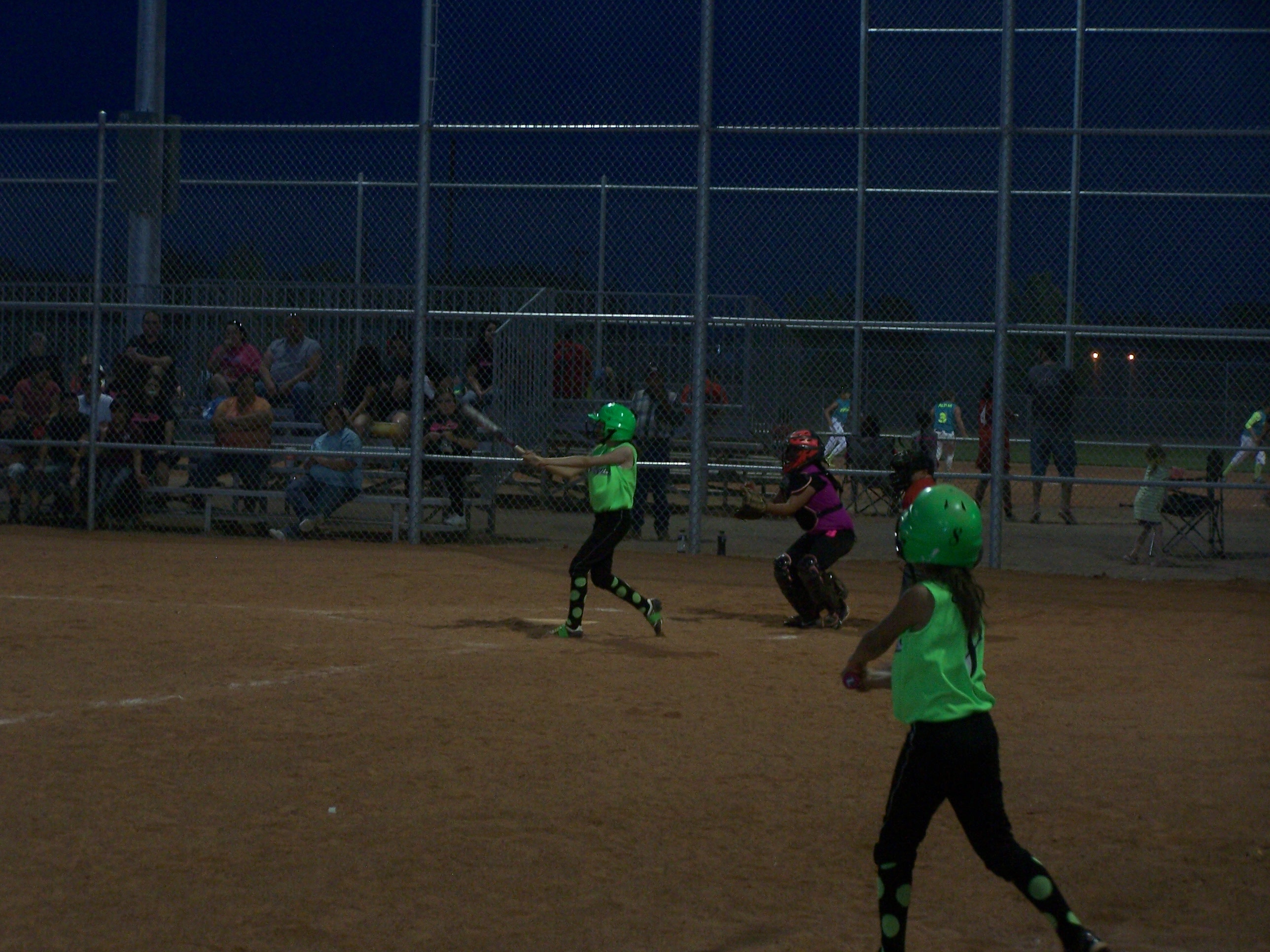 Watching my girls in green at bat reminded me of eating at that taco truck downtown, the runs just wouldn’t stop.

Some of the hits and plays my lime laden ladies were making were spectacular, we couldn’t believe our eyes. 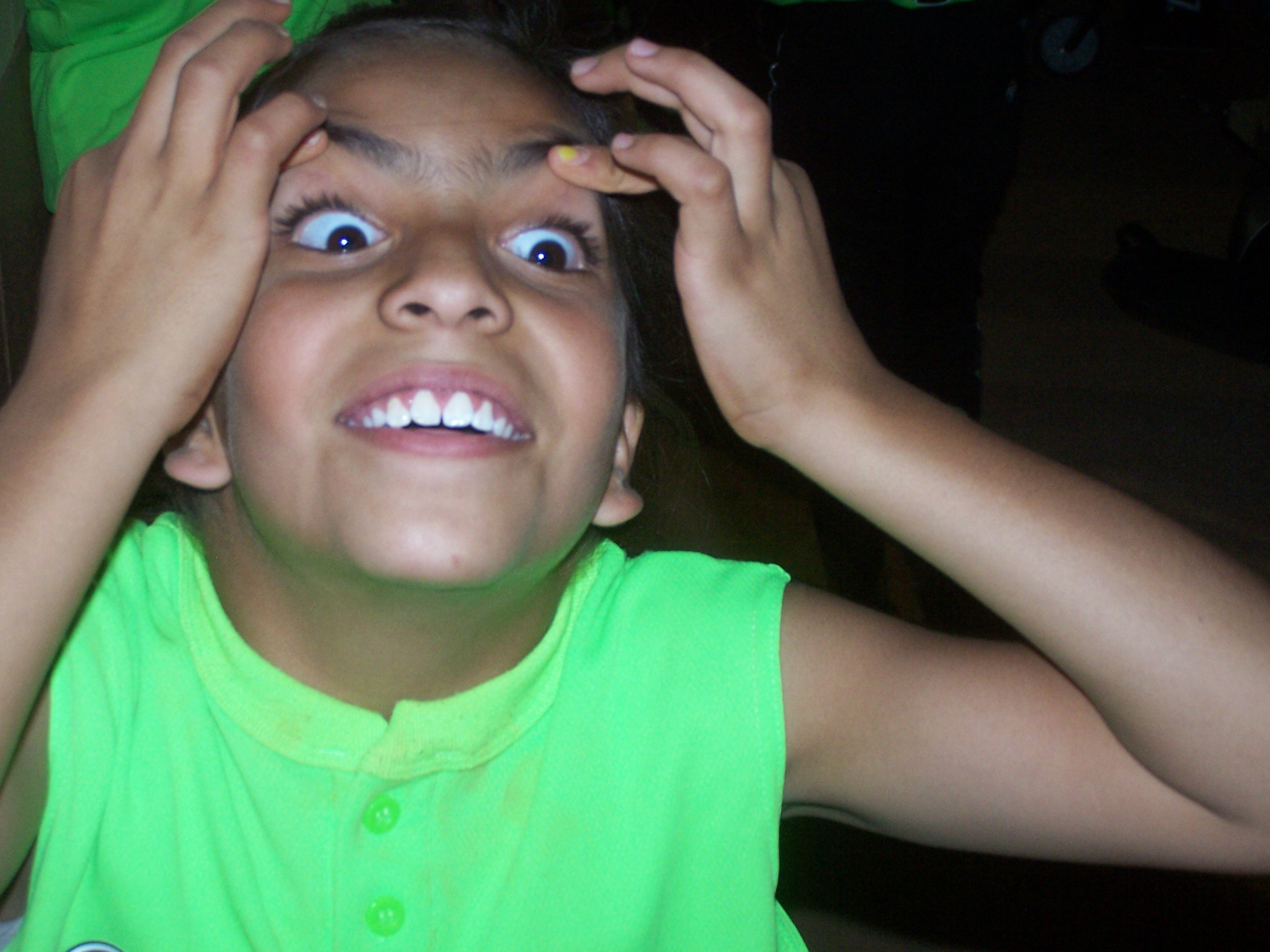 The Sluggers were able to win both games on Tuesday night and gained a little of their mojo back from Monday night’s heartache. 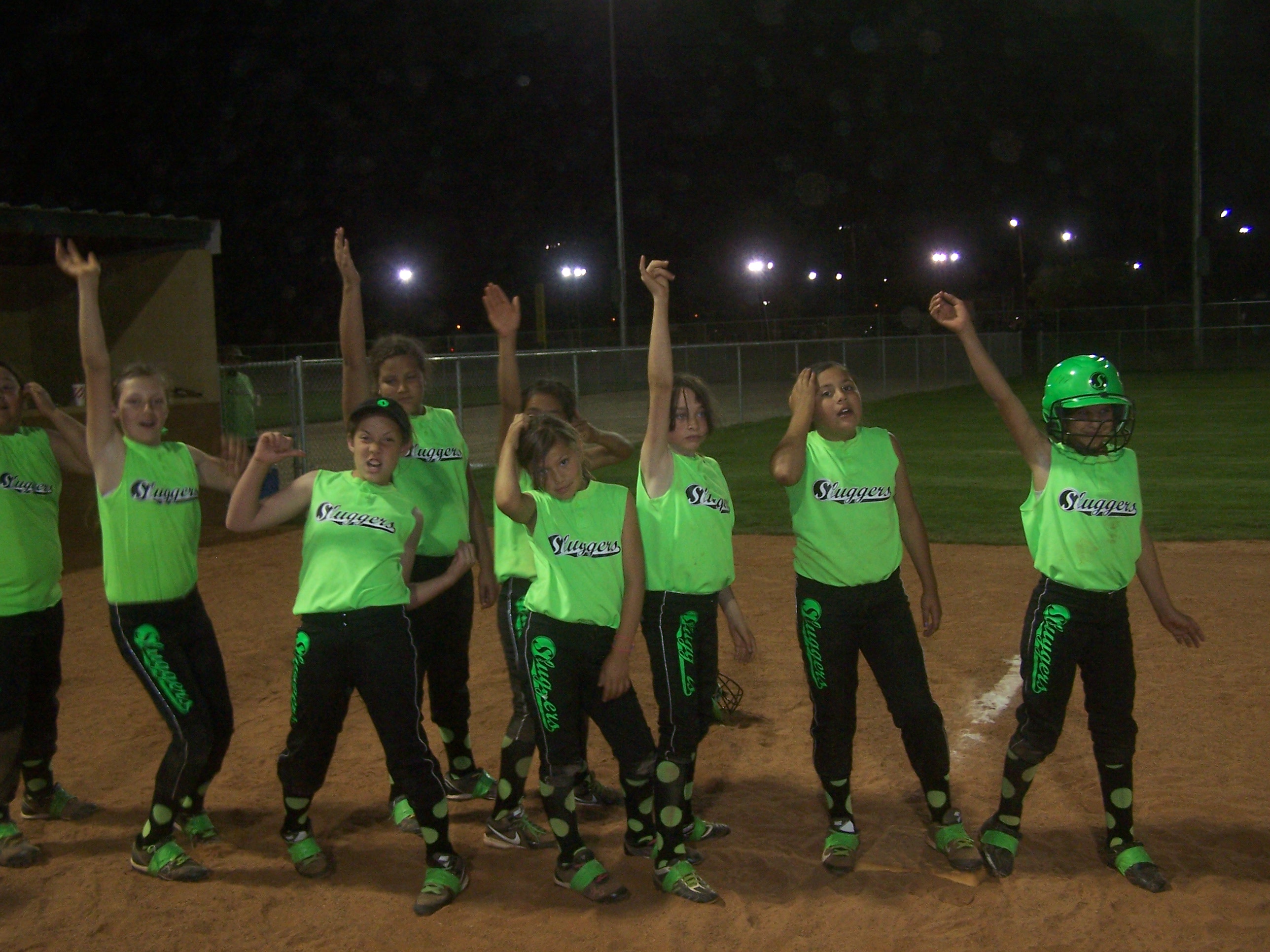 In the end the girls came together as a team again and almost all of our Sluggers hit at least once.  So needless to say the night was great, but there was one other injury.  During the second game our batting ninja Hope knocked a fly over second base.  When the center fielder threw in the ball she put it right into the forehead of the second baser.  Don’t worry, by the end of the game she was either delirious from a traumatic head injury or she was feel a lot better. 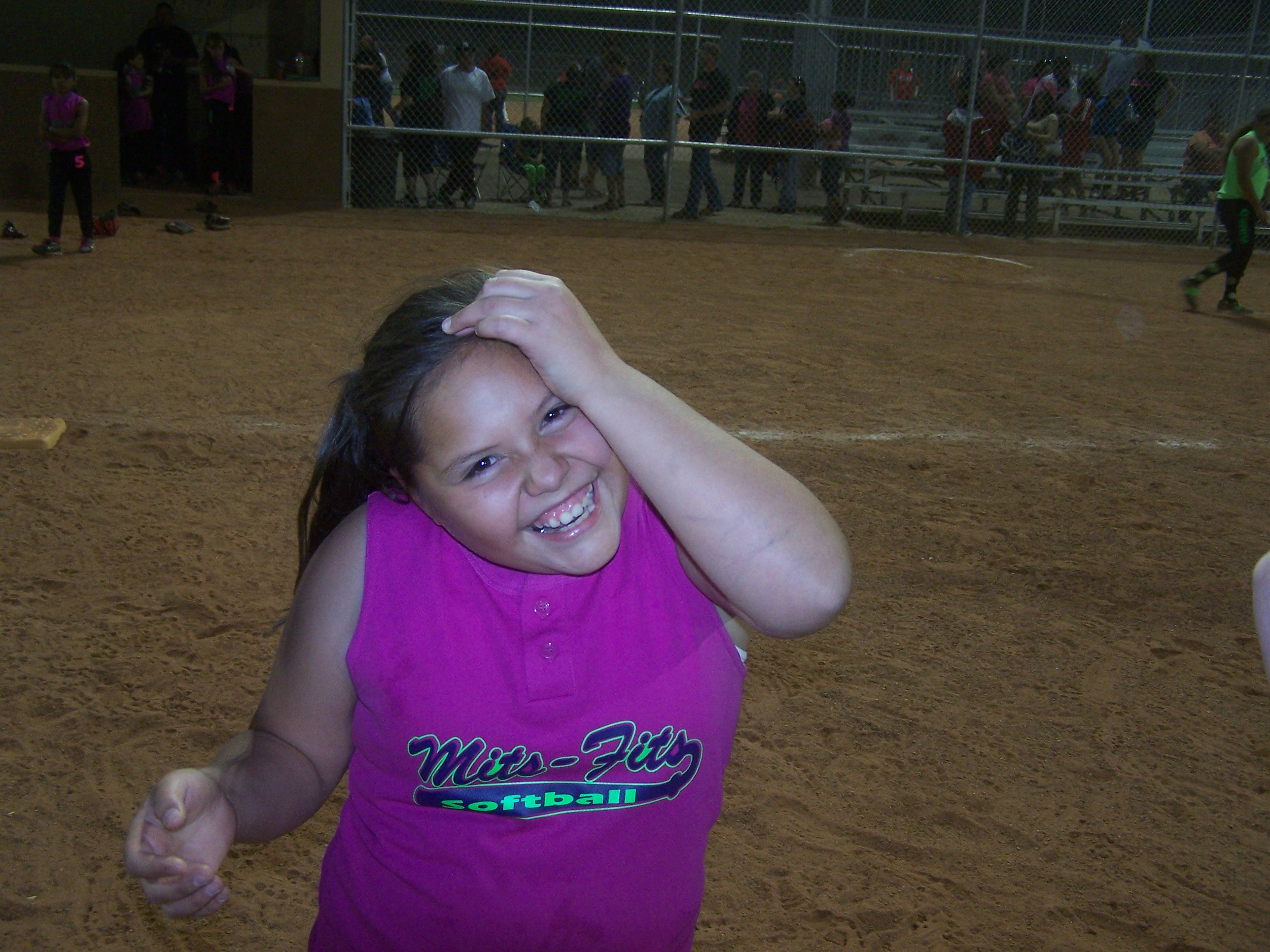 If you dig this post hit that little like button down there.  You know where it is –
If you would like to see all of the photos from Tuesday night’s game, there’s a lot of them, click on any of the image and you’ll be magically transported to that date’s gallery.

The next Sluggers game is on Monday the 20th at 7:00pm.  Bring your green and show our ladies some lime love.